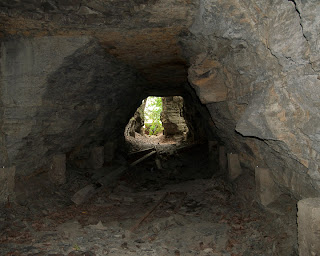 One must make the initial descent into Deterra by treading reservedly, taking frugal steps and grasping lightly at roots as one reaches the gorge
floor. There, one faces a wall, greeting a vista lost for longer than a century, and a tunnel blasted through the gorge wall. During the Autumn, leaves accumulate along the floor, forming a slowly decaying carpet that stretches toward the tunnel’s mouth. 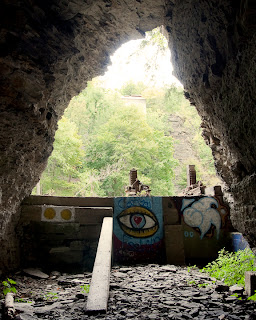 Eyes adjust slowly to the dimmed light, but travelers find themselves at the other end before their feet can betray them on an uneven piece of rock.  One leaves the tunnel by climbing, or, alternatively, strolling along the axis of a perched lumber beam until reaching an open-ended parenthetical aside in concrete. 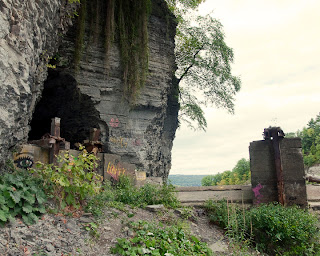 Words used to describe Deterra refer to a purpose it no longer serves, but its second life resides beneath its collapsed lumber beams and rusted metal skeletons striking anguished poses. Deterra’s story is an alternative to the histories of unfettered progress and smooth paving told from loftier
perches, one that repeats itself with nothing changed but the characters’ names: Violent collisions of the earth’s plates, the slow dissolution of rock against water, metal against stone, and combustion. 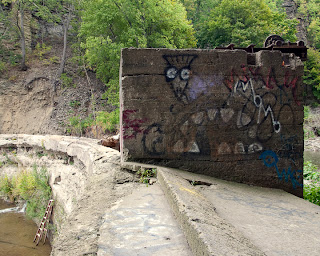 With each retelling, the delta widens, more chips of siltstone tumble down to the floor, and the concrete catwalk becomes imperceptibly slimmer. At every denouement, growth in its various guises appears within Deterra’s negative spaces. Wispy branches of leaves hang delicately down Deterra’s ragged cliff walls and an eye sprayed onto cement creates the effect of a winking visage in abstract. From the catwalk, a visitor to Deterra overlooks a series of rapidly cascading falls and the town they amble into.  Beneath the concrete perch is a scavenged ladder, propped against the improbability of it serving its given function.